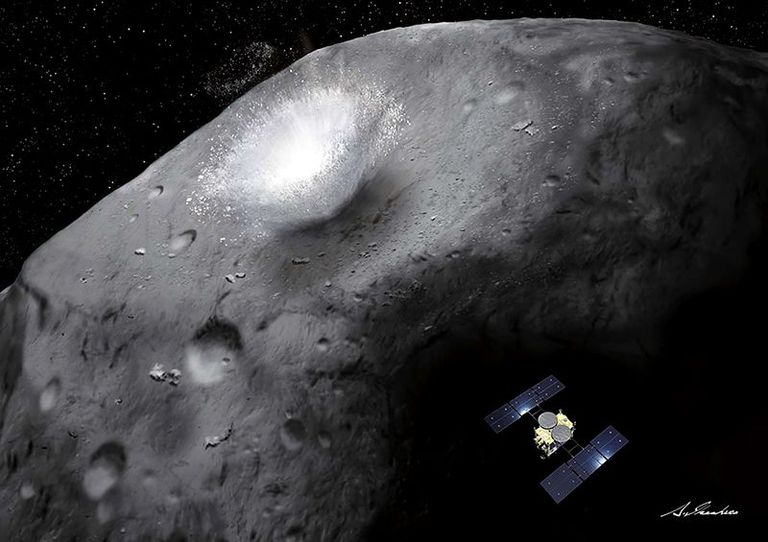 Japan’s Hayabusa-2 spacecraft has been traveling through space for almost four years, and it has finally reached its destination. The spacecraft has traveled all this way to a small asteroid, named Ryugu, for a singular purpose: to collect a piece of it and bring it back to Earth.

Hayabusa-2 is the successor to Japan’s original Hayabusa spacecraft, which visited the asteroid Itokawa in 2005. The original Hayabusa snatched a sample from Itokawa and brought it back for scientists to study. This was the first successful asteroid sample-return mission, and scientists learned so much from it that they decided to launch a second spacecraft to collect more asteroid material.

The asteroid Ryugu, recently imaged by the Hayabusa-2 spacecraft that will now prepare to collect a sample.
JAXA

This time around, Hayabusa-2 is focused on a slightly different type of asteroid. The original Hayabusa visited an S-type asteroid, a lighter variety made mostly of silicon. Hayabusa-2, however, is visiting a C-type asteroid, which are far more common than S-types and are typically made of older material. Studying a C-type asteroid can tell us more about the rocky bodies in our solar system and what the system looked like when it was young.

Now that Hayabusa-2 has finally reached its target, it can begin the next phase of its journey: finding a suitable location to land and collect its sample. Over the next year and a half, Hayabusa-2 will study Ryugu in detail, collecting scientific data on the asteroid before finally landing and collecting its sample in 2019. Then, it will begin the journey back to Earth in 2020.

Once it arrives back home, scientists will study the sample to learn as much as they can about it—but we likely won’t have to wait until 2020 to get new discoveries from the Hayabusa-2 mission. The spacecraft is already sending back images of the asteroid that scientists can use to learn more about our solar system, which means the first real discovery made with Hayabusa data could happen very soon.

You can now purchase the smell of space

South Pole warming faster than the rest of the world

Exposed core of gas planet observed for the first time

Enjoy Japan’s hot springs from the comfort of your home

Would Japan Dump Radioactive Water Into the Pacific Ocean?