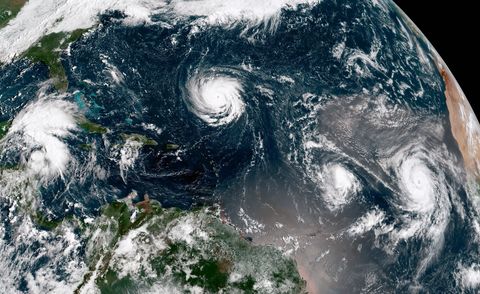 Three hurricanes are currently brewing in the Atlantic ocean. As Hurricane Florence is expected to hit North Carolina, South Carolina, and Virginia as a Category 4, sparking a preemptive state of emergency, Hurricanes Isaac and Helene lie in wait.

It’s a startling triple threat that’s not without precident. In fact, it happened only last year with Hurricane Irma barreling toward Florida, Hurricane Katia hammering Mexico, as Hurricane Jose was waiting in the wings.

A trio of powerful hurricanes growing simultaneously is obviously bad, but it also raises a question: How much worse could it be? Just how many hurricanes can the Atlantic harbor at once?

To try to find an answer, we asked Dr. Anand Gnanadesikan, a climate modeler and professor of Earth and planetary sciences at the Krieger School of Arts and Sciences. According to Gnanadesikan, the number of storms in the Atlantic depends on two main factors. The first is whether or not conditions are favorable to the development of tropical cyclones.

The second thing you need is a spark—”seed” storms that, under the right circumstances, are supercharged into hurricanes. These low-pressure systems sometimes self-organize; other times hurricanes-to-be trace their roots eastward to Africa. They generally form a few thousand kilometers apart, which means there’s limited space. Gnanadesikan says: “So a question one could ask is, ‘How many seeds might one find in the Atlantic and how likely is it that they will all grow?'”

Using NOAA’s HURDAT2 database, which contains data from as far back as 1851, Gnanadesikan found that any time one tropical cyclone is present in the Atlantic, there’s historically about a 20 percent chance that a second seed will grow up into a cyclone. The odds of a third seed ascending are roughly the same—20 percent of the those two-storms situations. This diminishing trend probably leads to a three-cyclone situation in about four percent of records, but that also includes many cyclones which never made landfall.

By the time you get to four or more cyclones at one, that level is found in only about 340 records—less than one percent. At about four simultaneous storms, Gnanadesikan says, “you might start running out of seeds.”

“For example, there aren’t any other disturbances in the entire North Atlantic which might spawn a tropical cyclone in the couple of days before Katia slams into Mexico. There are only 32 records with five or more storms, again suggesting that we might be running out of seeds—and a handful (9 cases) with six.”

Given the twin restrictions of hurricane formation—atmospheric conditions and seed-storm supply—and using historic data as a guide, Gnanadesikan supposes that the practical worst-case scenario is seven simultaneous storms, despite the fact that there is physically room for many more to cram in.

The affects of a warming climate on this limit are complicated and unclear for the moment. Since climate change is expected to warm the air in the upper atmosphere more than the surface of the water below Gnanadesikan explains, it could make it harder for storms to form, but more likely they will be severe. Additional variables like wind shear—the variance in wind speed and direction over a short distance—only serve to complicate predictions further.

As always, the only way we can truly know how many storms will show up in the future will be to watch.