According to posts on Facebook, U.S. Army four-star General Stephen J. Townsend is looking for love. And money.

The account is fake, of course. But the distinguished general, who served in command roles in Afghanistan and Iraq, is a remarkably popular target for scammers. There are so many fake social media profiles claiming to be Townsend that yesterday the U.S. Army released this plea: “Gen Stephen J. Townsend, TRADOC [commanding general], is NOT on Facebook, Twitter, Skype, Instagram, Google Hang Out, dating sites, chat rooms, etc. Below are examples of impostor accounts, these impostors attempt to harass & scam individuals.” 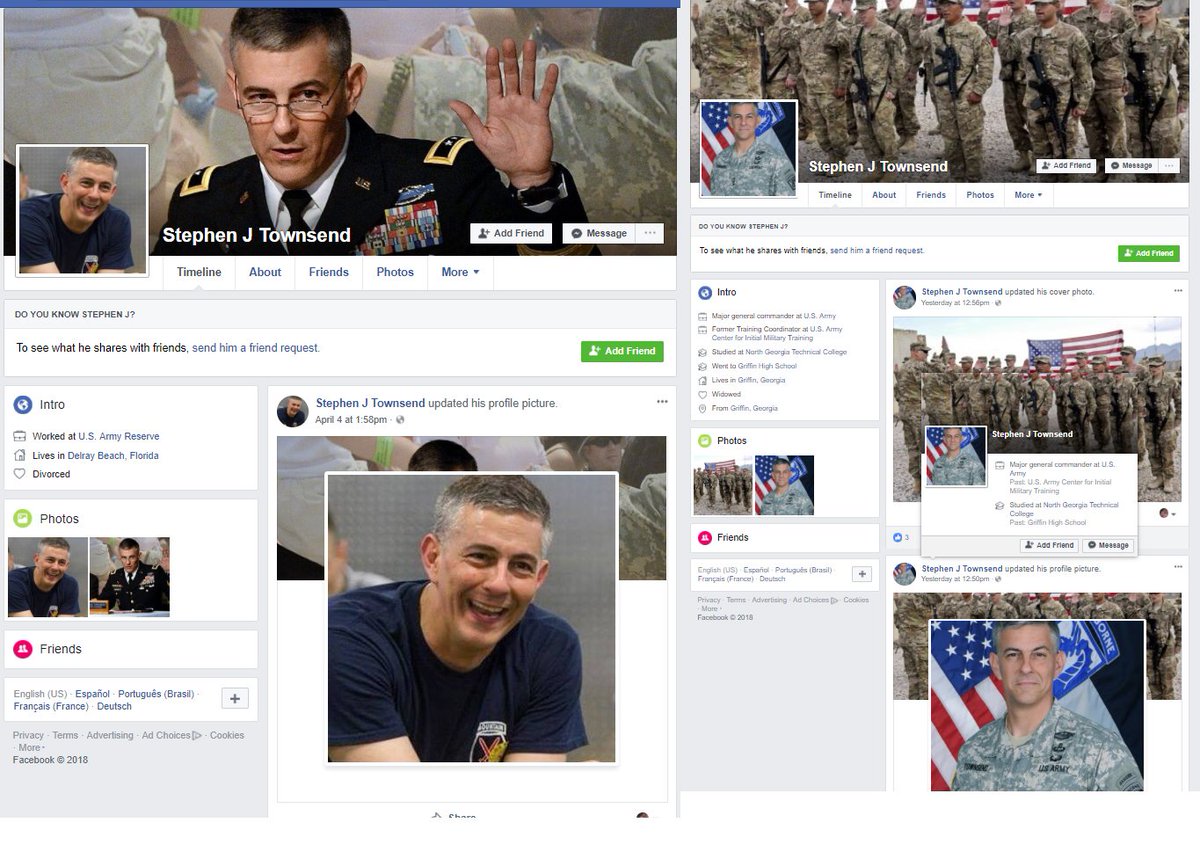 ***IMPOSTER ALERT*** Gen Stephen J. Townsend, TRADOC CG, is NOT on Facebook, Twitter, Skype, Instagram, Google Hang Out, dating sites, chat rooms, etc. Below are examples of impostor accounts, these impostors attempt to harass & scam individuals. If you find one, report them!

Townsend is a high-ranking example of the kind of identity theft currently plaguing the U.S. military. While many worry about high-end threats from Chinese and Russian hackers, a global army of crude identity thieves have targeted U.S. troops at all command levels. The U.S. Army Criminal Investigation Command (CID) says it receives hundreds of reports a month from victims of scams perpetrated by online impersonators.

Scammers use publicly available images of soldiers to fake their identities online, then use the fake profiles to set up sexual advances and pleas for money. The Army’s official warning describes sextortion schemes, wire transfers of funds to supposedly needy troops overseas, and bullying harassment. Townsend—his real-life details embellished with the right tragic/romantic backstory—is being used as a sexual lure.

“Victims of these ‘romance scams’ report they became involved in an online relationship with someone they believed to be a U.S. soldier who then began asking for money for various false service-related needs,” the Army says. “Victims of these scams can lose tens of thousands of dollars and face a slim likelihood of recovering any of it.”

A Plethora of Phonies

It doesn’t take a lot of digging to find phony Townsend profiles. One uses his image and some biographical information to create a Facebook page. It has more than 90 followers, all from India, but no posts.

The general has been a popular target for scammers. In 2014, reports of his identity being misused started to surface on tip reports of anti-scam websites like Scamlot.com. One report from 2014 said someone posing as the Army general “contacted me on Tinder and asked to use Hangouts to communicate.”

Another describes an approach on Skype “by someone who said he was Maj. Stephen Townsend of the U.S. Army, based in Afghanistan and working for NATO.” That fake version of Gen. Townsend has a tale of woe: an unfaithful wife who divorced him and an adopted son he plucked from the battlefield—all described in broken English. (The real general remains married to Melissa Crawford Townsend, a 1983 graduate of the Medical College of Georgia.)

If you suspect fraud on a dating site, take a screenshot and report the account to the platform. Soldiers are not supposed to put their current locations on social media, so that’s another red flag. And soldiers asking for money is a definite sign of something wrong.

“The most common scheme involves criminals, often from other countries—most notably from West African countries—pretending to be U.S. soldiers serving in a combat zone or other overseas location,” the Army says. “These crooks often present documents and other ‘proof’ of their financial need when asking their victims to wire money to them.”