The second big blow against the blueprints in the past few weeks. 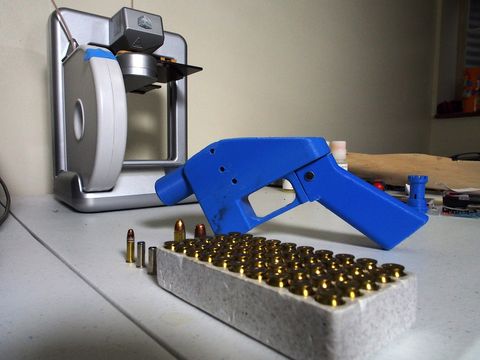 After a major website’s shutdown, 3D printed gun blueprints face another hurdle: Facebook is blocking sites that host digital blueprints to make guns on 3D printers from using their social media platform, according to Buzzfeed.

Facebook’s decision comes amidst a multi-state attack on 3D-printed guns, which itself was prompted by the State Department’s recent decision to drop charges against the group Defense Distributed’s website DEFCAD.

DEFCAD, one of the world’s most prominent distributors of 3D printed gun files, had been facing charges that it had been allowing the transfer of weapons of war overseas. While the State Department has dropped the matter, eight states have raised it, and a judge agreed to temporarily shut down the site, noting that “the balance of hardships and the public interest tip sharply” towards having the sites inoperable.

Facebook does not need the courts to act, though, and has invoked its own rules against Defense Distributed. “Sharing instructions on how to print firearms using 3D printers is not allowed under our Community Standards,” the California company said in a statement. “In line with our policies, we are removing this content from Facebook.”

DEFCAD is not the only website where one can get the blueprint for a 3D-printed gun, of course, even if they occasionally explode while in use. CodeIsFreeSpeech.com is another website which distributes blueprints for guns like Berettas, AR-15s, AR-10s, Rugers and the gun made entirely from 3D printing, the Liberator. Facebook’s ban appears to be targeting the site and those like it.

The Firearms Policy Coalition, a pro–Second Amendment nonprofit which runs CodeIsFreeSpeech, caught on to the ban last week. In a statement, the nonprofit said that in “What we are experiencing is a complete ban on CodeIsFreeSpeech.com — not a ‘shadow ban’, not a reduced newsfeed presence, but a complete and total ban. Welcome to Facebook North Korea…”

The social media giant says it is currently working on strengthening its stance against 3D guns, although it has not provided any additional examples.

The status of 3D-printed guns is constantly evolving. While the State Department has dropped its challenge, President Trump has tweeted that selling 3D-printed guns to the public “doesn’t seem to make much sense!”

Print your face onto a surgical mask