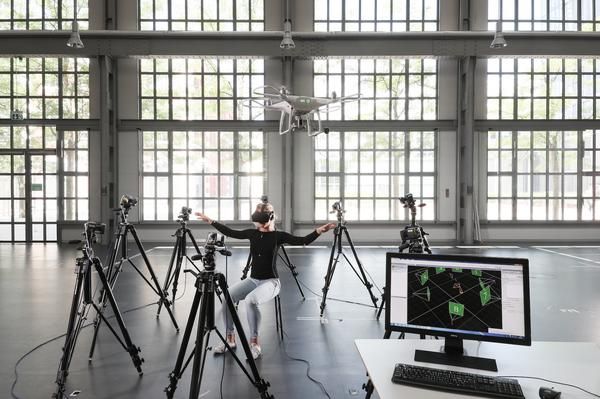 Today, drones are typically flown with a controler, but Swiss researchers at École polytechnique fédérale de Lausanne (EPFL) now claim they have a better way: using the human body.

The EPFL scientists have designed a system which uses the human torso to control a drone as opposed to using a joystick. This would leave a person’s head free to look around, “much like a bird,” the EPFL notes in a press release.

“Our aim was to design a control method which would be easy to learn and therefore require less mental focus from the users so that they can focus on more important issues, like search and rescue. Using your torso really gives you the feeling that you are actually flying. Joysticks, on the other hand, are of simple design but mastering their use to precisely control distant objects can be challenging,” says Jenifer Miehlbradt, lead author of the team’s resulting paper in PNAS, in the press statement.

With the goal of making drone flight more in tune with the human body, researchers instructed 17 test subjects to mimic a drone flying through the air. Each participant wore VR goggles showing a drone’s journey and were instructed to copy it. Their acting was monitored by 19 separate infrared markers on their upper bodies.

Soon enough, a pattern emerged. Only 4 of the markers were actually being used consistently—those on the torso. With just their torsos, the test subjects were taking their drones through both virtual and real world obstacle courses.

Further testing led the scientists to compare using a human torso versus a joystick on 39 individuals. Even with with minimal training sessions on how to operate them torso drone control proved instinctual. It outperformed joystick control in precision and reliability.

“Data analysis allowed us to develop a very simple and intuitive approach which could also be used with other populations, machines, and operations. The approach significantly improves the teleoperation of robots with non-human mechanical attributes,” says Silvestro Micera of the Bertarelli Foundation, which helped fund the research.

Reserachers at EPFL have been experimenting with the basic elements of drone usage for years. In 2015, they were working on a folding drone that could inside a pocket. Last year, using energy absorbing materials, they were making a drone that was extremely difficult to break.