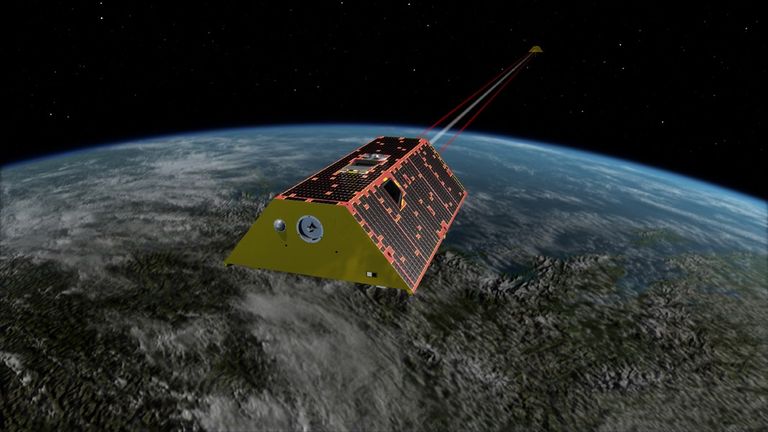 Back in May, a SpaceX rocket carried two NASA satellites into orbit. The GRACE Follow-On satellites were a continuation of the initial GRACE mission, and over the past month these satellites have been undergoing a series of tests to ensure they’re prepared to do science, and according to a recent test the spacecraft are more than ready.

NASA’s original GRACE mission—which stands for Gravity Recovery and Climate Experiment—was a pair of satellites that orbited the Earth together. These satellites were designed to precisely measure changes in Earth’s gravity at different places, by using lasers to measure how far apart the satellite pair were. If the two satellites drifted closer together or further apart, that information could be used to pinpoint a place where Earth’s gravity is slightly higher or lower than average.

These satellites are sensitive enough to detect the changing levels of ice at the Earth’s poles, determine how much water is stored in underground aquifers, or track the movement of magma beneath the Earth’s surface. As a result, scientists can use data from the GRACE mission to study the effects of climate change all over the world, even when those effects might not be visible.

But of course, GRACE requires two satellites to work, and one of those satellites stopped working properly last year. To replace them, NASA launched two new satellites, called the GRACE Follow-On mission. These new satellites will take over for the original GRACE satellites and bring more advanced rangefinding technology to the mission.

That new technology includes a laser rangefinder, which supplements the microwave rangefinding technology used in the original GRACE mission. Laser rangefinding is still a new technology, and the GRACE-FO mission provides a great opportunity to test its capabilities. Over two days last month, the two satellites blasted lasers at each other in an attempt to locate the other satellite’s detector.

“There are coin-sized holes on each satellite through which the laser has to be precisely pointed towards the holes in the other satellite over a distance of more than 200 kilometers [137 miles], while both spacecraft race around Earth at 27,000 kilometers an hour [16,000 miles per hour],” said scientist Gerhard Heinzel. “It is truly mind-boggling.”

This calibration period was successful, and the satellites located each other and established a constant laser connection right away. “The plan for establishing the laser link worked exactly as designed. In fact, the laser link locked in on the first attempt,” said JPL mission lead Christopher Woodruff.

Now that the system has been calibrated, the new GRACE satellites can begin studying the Earth’s gravity in unprecedented detail, giving scientists a deeper understanding of the moving parts of our planet.